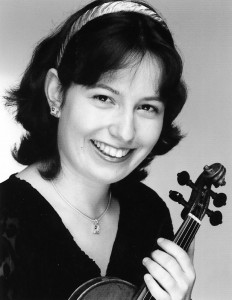 Born in Transilvania, Kati immigrated to Israel at the age of 15. She finished her studies with Ora Shiran, and pursued an interest in historical performance by studying the Baroque violin in London with Catherine Mackintosh and Walter Reiter.

In the year 2000 she was one of the leaders of the English Baroque Soloists in J.E. Gardiner’s Bach Cantata Pilgrimage, and her playing can be heard on many of the recently released live recordings on the SDG label.

Since then she has been invited as guest leader by numerous groups, such as The Orchestra of the Age of Enlightenment, the King’s Consort, the English Concert, the Sevilla Baroque Orchestra and the Balthazar

Neumann Ensemble. She continues as a co-leader of the EBS, and has performed a reconstructed double concerto by Mozart with pianist Robert Levin at the Salzburger Festspiele of 2006.

Kati is an active chamber musician, and is a founding member of Ricordo, specialising in the “stylus phantasticus” of the 17th c. Their debut CD of the music of H. Biber was released to critical acclaim on the Linn label.

Between 2001-2006 she was a member of Florilegium, performing world-wide and recording award-winning CDs for Chanel Classics. Their latest volume of Telemann’s Paris Quartets was nominated for this year’s Gramaphone award.

Her latest interests include directing from the violin, which she has done in Israel, Iceland and Poland, and developing as an educator. From 2005 she is on the faculty of the Royal Conservatory in the Hague, Netherlands.