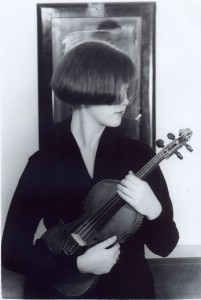 Began studying the violin with her parents: Margaret Martin and Paolo Centurioni. In 1984 she was admitted to the Conservatory “S. Cecilia” in Rome, to the class of M° Alfredo Fiorentini, with whom she studied until her diploma. In 1992 she joined the KonzertKlasse of Mª Adelina Oprean at the “MusikAkademie der Stadt Basel” (Basle, Switzerland) where she remained for two years.

In 1994, moved by her interest for ancient music, she decided to take the admission examination for the “Schola Cantorum Basiliensis”, where she was admitted to the class of Chiara Banchini with whom she studied for four years. From that moment, she began her partecipation with various famous ancient music groups, such as: Ensemble 415 (Chiara Banchini), Concerto Vocale (René Jacobs), Le Concert de Nations (Jordi Savall),