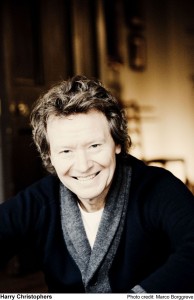 Harry Christophers is known internationally as founder and conductor of The Sixteen as well as a regular guest conductor for many of the major symphony orchestras and opera companies worldwide.  He has directed The Sixteen Choir and Orchestra throughout Europe, America and the Far East gaining a distinguished reputation for his work in Renaissance, Baroque and 20th-century music.  He has made a significant contribution to the recording catalogue (already comprising some ninety titles) for which he has won numerous awards including a Grand Prix du Disque for Handel’s Messiah, numerous Schallplattenkritik, the coveted Gramophone Award for Early Music and most recently, the prestigious Classical Brit Award 2005 for his disc entitled Renaissance.  His CD IKON was nominated for a 2007 Grammy.  In 2000 he instituted the Choral Pilgrimage, a national tour of English cathedrals from York to Canterbury in music from the pre-Reformation, as The Sixteen’s contribution to the millennium celebrations.  It raised awareness of this historic repertoire so successfully that the Choral Pilgrimage in the UK is now central to the annual artistic programme.

In September 2008 Harry Christophers was appointed Artistic Director of Boston’s Handel and Haydn Society, he is also Principal Guest Conductor of the Granada Symphony Orchestra and enjoys a very special partnership with the BBC Philharmonic which has seen a disc of American-inspired works by Ives, Stravinsky, Poulenc and Tippett winning a Diapason d’Or.  He is also a regular guest conductor with the Academy of St Martin in the Fields and the Orquestra de la Comunidad de Madrid who have all benefited from his dynamic brand of programming.  Within the last few years he has also conducted the Hallé, the London Symphony Orchestra and San Francisco Symphony, with whom he returned to conduct in Spring 2008.

Increasingly busy in opera, he began a Monteverdi cycle in 1998, in new productions for Lisbon Opera House, with Il Ritorno d’Ulisse in Patria, following his success there with Gluck’s Orfeo.  In 2000, he conducted Mozart’s Die Zauberflöte for the Lisbon Opera as well as Purcell’s King Arthur and Rameau’s Platée and made an acclaimed debut with English National Opera, conducting Monteverdi’s The Coronation of Poppea.  He has since conducted productions of Gluck’s Orfeo and Handel’s Ariodante at ENO as well as the UK première of Messager’s opera Fortunio for Grange Park Opera.  In 2006, Mozart’s anniversary year, he conducted Mozart’s Mitridate for the Granada Festival and after the outstanding success of Handel’s Semele and Hercules and Mozart’s Ascanio in Alba at Buxton Opera in past seasons, he returned in 2008 to conduct a highly acclaimed and stunningly powerful new production of Handel’s Samson. He returns to Buxton later this year to conduct Handel’s Saul.